Hair loss is common among middle-aged men, but it also affects 30% of women. Hair loss is a normal physiological phenomenon, with approximately 10-70 hairs falling out per day, especially when washing. Hair has a certain cyclical pattern: it grows, then sleeps and shrinks, and then new hair grows in its place. Problems arise when more than 100 hairs fall out and the hair cannot be restored or stopped from falling out.

Hair loss is mainly caused by a combination of genetic factors, hormones and age. In addition to androgenetic alopecia, hair loss can be associated with other causes, the most common of which are exposure to medications, stress, harmful environmental influences, and malnutrition, i.e. deficiencies of iron, zinc and vitamin B.

Although hair loss is more common in men, around 30% of women also suffer from alopecia.

Women tend to experience hair loss at a later age than men, but hair can also start to weaken or fall out at a younger age, so women of all ages can experience baldness.

Register for a consultation 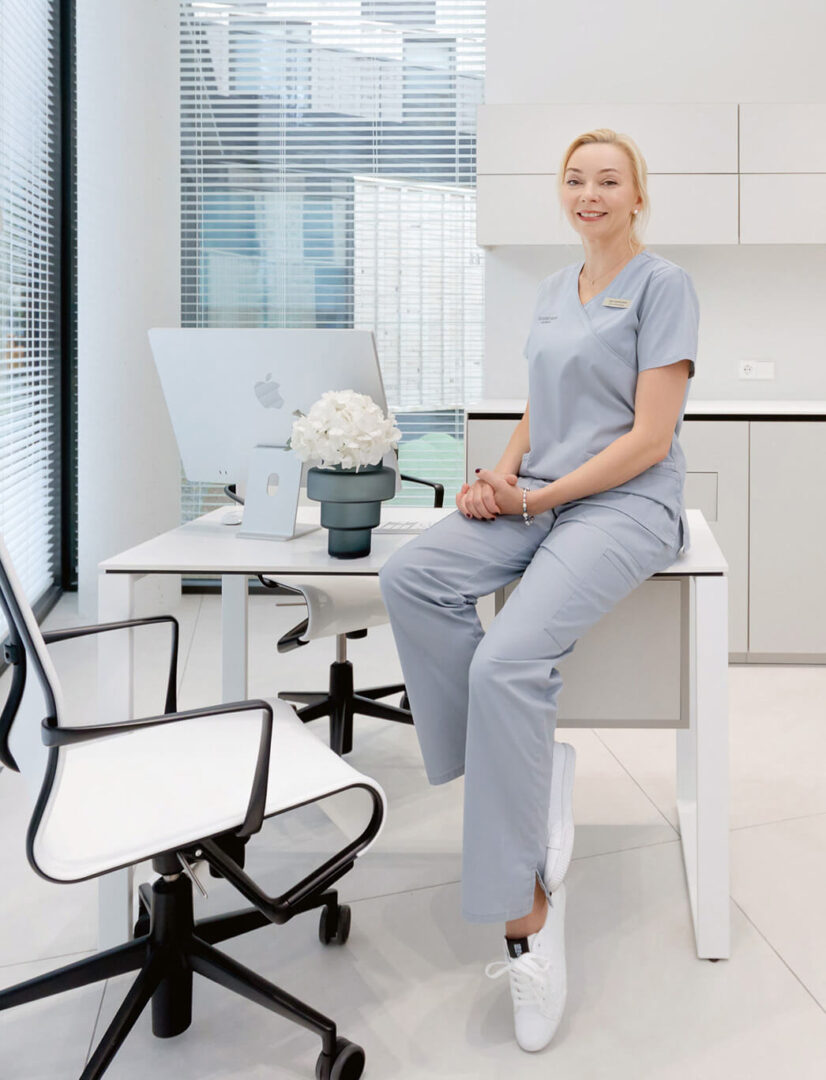 The most common cause of hair loss in women.

The most common cause of hair loss in women – androgenic alopecia. However, androgenetic alopecia affects men’s and women’s hair differently.

Specialists determine the degree of hair loss in women using the Ludwig scale and in men using the Norwood-Hamilton scale.

According to the Ludwig scale:

In most cases, androgenetic alopecia is a harmless genetic phenomenon. However, in some cases, hair loss may also be a consequence of various neoplastic diseases, hormonal disorders and the use of certain drugs. It is therefore important to accurately diagnose the cause of hair loss before undergoing medical procedures.

Alopecia areata is the second most common balding condition. It is a focal loss of hair over a larger or smaller area of the scalp or body. It is common in both genders. When all the hair in one area falls out, the phenomenon is called total alopecia, and when all the hair on the scalp and body falls out, it is called generalized alopecia.

Such hair loss is caused by a variety of reasons, most commonly an autoimmune disorder in which the immune system attacks the hair follicles, causing excessive and rapid hair loss.

This type of baldness can also occur after severe stress or in people with thyroid disorders.

Unlike androgenetic alopecia, which causes permanent hair loss, focal alopecia is followed by hair regrowth in 90% of cases. Around half of the people with this condition regrow their hair within six months.

Tellogenic hair loss is a condition in which the hair enters a resting, or “sleep”, state too quickly and then falls out prematurely. This results in too much hair being lost, which cannot be restored, leading to thinning of the hair throughout the scalp.

This is usually a temporary loss of hair, which then grows back.

The causes of telogen hair loss are varied: it can be related to high stress, environmental toxins, certain diseases, or the use of certain types of medication. It can occur during menopause or pregnancy and after childbirth, and may be caused by a deficiency of trace elements (e.g. iron, zinc, vitamin B).

How can women avoid hair loss?

If you notice more than 100 hairs falling out per day, it is important to see a dermatovenereologist as soon as possible to prevent diseases and hormonal disorders. He or she will suggest the most effective treatment for hair loss.

At “SAPIEGOS CLINIC“, we also offer hair growth and restoration treatments for receding hair loss, and mesotherapy and stem cell therapy, using your own blood, as an additional treatment for post-transplant scalp. These treatments deeply nourish and restore the hair follicles and all the cells of the scalp, helping to preserve and regrow hair.

Mesotherapy is a non-surgical and minimally invasive method of aesthetic dermatology. It helps to restore the scalp by injecting a cocktail of vitamins, minerals, antioxidants, hyaluronic acid and other active ingredients directly into the scalp. This method has been used for more than sixty years not only to restore hair but also to rejuvenate the skin of the face and body. It produces very good results. Hair that is slipping due to a lack of nutrients is given a strong stimulus to regrow, thus stopping the process of hair loss.

The Hair Loss Prevention Procedure using your own blood (PRP) is an innovative method. This therapy uses blood plasma to stimulate scalp renewal. The platelets, bioactive substances and growth factors in the blood plasma nourish and stimulate cell regeneration naturally and effectively.

Androgenetic alopecia can also be treated with certain medications such as minoxidil, finasteride, anti-androgens, or oestrogens, but as these drugs are quite toxic, the decision on whether to use them must be made by a dermatologist.

Sometimes your doctor may recommend a combination of procedures, such as transplantation and mesotherapy, or a stem cell approach to nourish the scalp and stimulate the regeneration of transplanted hair.

Women of all ages experience hair loss. If you are one of them, be sure to get in touch with our team of specialists who can offer the latest treatments for alopecia and help you prevent hair loss. Contact our trusted team of professionals! Register for a consultation 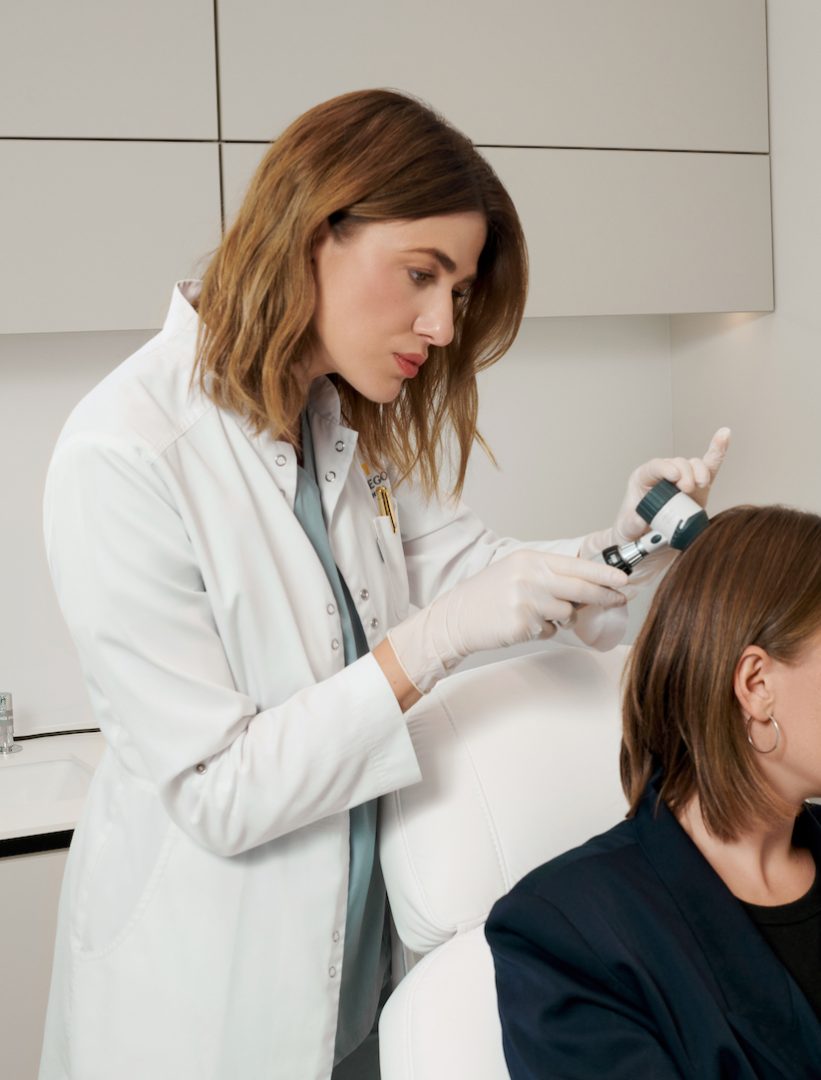